Biogas is a combustible gas consisting mainly of methane (CH4), carbon dioxide (CO2) and nitrogen (N2). It is obtained by fermentation of organic matter inside an anaerobic digester, where the retention hydraulic time can range from 20 to 60 days as required.

Waste or organic by-products that are digested may be:

Products coming from agricultural activity such as vegetables, vegetables or fruits rejected from the processing chain.

Products coming from livestock activity, such as slurry, manure or poultry.

Also, from the recovery of the organic fraction of mixed waste in the form of the so-called biopulp. 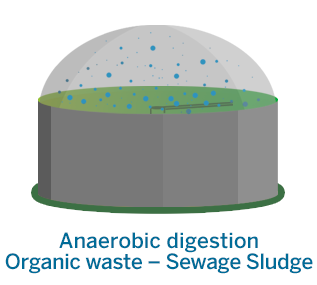 In anaerobic digestion three important stages take place, which are hydrolysis or dilution of the present solids, acidification that occurs as a result of the decomposition and a process of methanogenesis carried out by a flora of bacteria that are responsible for the formation of methane, under conditions of absence of oxygen and at a temperature between 35-37ºC (mesophilic range) or between 45 and 55ºC (thermophilic range) in an agitated medium.

As a result of the above phases, a significant percentage of volatile solids or organic matter, contained in the input residue, leaves the digester in the form of biogas, while the rest of the digested product, called digestate, leaves it in the form of a solid with a high moisture content.

Both the richness of the biogas in terms of methane content, and especially the composition in Nitrogen, Phosphorus and Potassium (N: P: K) of digestate, depend on the composition of the product and by-products with which the mixture fed to the digester has been made.

That is the reason why the methane richness in biogas obtained from organic wastes can range from 50 to 80%, being common values of 60-65%, and carbon dioxide in a range between 15% and 50%, being usual values of 35%.
While for digestate, the composition in NPK will be the same that of the original product or the resulting of the mixture of the co-digested products, having in any case produced a change in the chemical forms in which they appear between entry and exit..

Digestate is the digested solid product with high moisture content that is obtained from anaerobic digestion.

Depending on its composition in NPK, its agronomic value will be greater or lower in terms of the supply of nutrients for crops, also having the added value that it is a stabilized product, so, when applying on the ground, it no longer produces emissions of gases to the atmosphere that can be annoying and harmful to the ozone layer, as some of them belong to the greenhouse gas group (GHG).

It can be applied directly as fertilizer, although it is usually first to go through a process of dewatering, increasing the dryness of the product to values close to or slightly greater than 20%. This much more manageable product is commonly used as a fertilizer.

However, in the valorization chain, solar or hybrid drying can be carried out, which is treated in another of the solutions.

The liquid fraction obtained in this process, if it cannot be reused directly as fertilizer, passes through a water treatment plant, obtaining clean water that can be reused for irrigation and sludge returned to the digester.

Biogas obtained from anaerobic digestion can be used directly in combustion boilers to heat the digester and to cover the thermal needs of the industry itself, as it is rare when the quantity produced is not surplus. Self-consumption in digester do not usually exceed 15% of the amount produced.

Cogeneration is another of the usual direct uses of biogas, prior to desulfurization treatment to prevent the entry of this compound into the engine’s combustion chamber.

With the cogeneration engine, electrical and thermal energy is produced.


The performance in electrical energy, for motors of power below 100 kW is usually small and is around 25%, since it prevails to have a greater thermal use to be able to heat the digester, being the thermal performance greater than 50%. Nowadays, the electrical energy produced is used for self-consumption, reducing the costs of external purchase of energy.

In contrast, for higher power motors electric and thermal yields are already balanced and usually around 38-42% each.

Biogas upgrading or enrichment is the next step in the biogas treatment chain. It consists of removing the carbon dioxide it contains, so that the result is a biomethane with a methane richness equal to that of natural gas (NG). Depending on the quantity produced, it may be feasible to inject it into the grid for distribution to any point for domestic and industrial use.

Biomethane can also be compressed, being equivalent to Compressed Natural Gas (CNG) or liquefied (LNG or LBG), to facilitate its transport over longer distances and be used in gas stations as fuel for heavy or vehicular transport 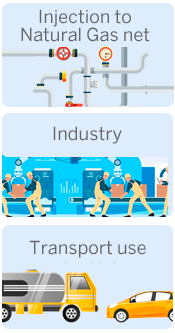 The result of this process is the transformation or recovery of waste and / or by-products into fertilizers and green renewable energy.

It is a renewable, sustainable and green energy because the carbon dioxide obtained from the combustion of this biogas has been previously extracted from the atmosphere through the process of photosynthesis of plants.

Subsequently, through the food chain and industrial uses, it becomes a waste and / or by-product, which with this technology are transformed back into biomethane, returning at the beginning of the cycle. Therefore, its balance in the atmosphere is neutral.

Instead, carbon from fossil fuels was extracted millions of years ago, currently being released and causing a mismatch between assimilation capacity and the amount emitted into the environment.

We use our own and third-party cookies for analytical and technical purposes; processing data necessary for the creation of profiles based on your browsing habits.
You can get more information and configure your preferences from 'Cookie settings'.